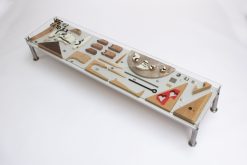 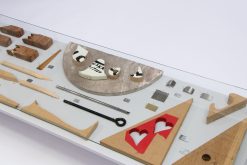 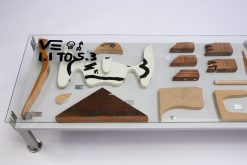 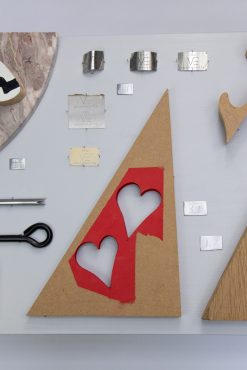 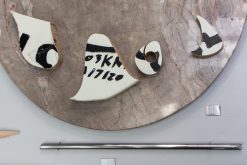 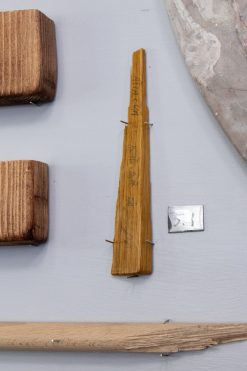 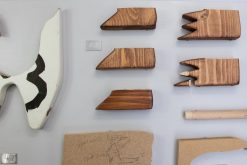 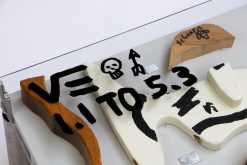 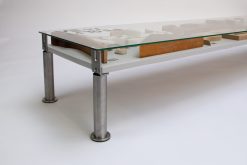 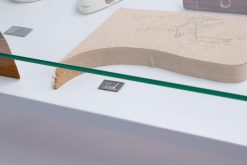 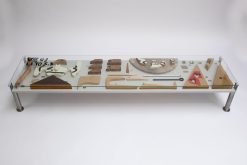 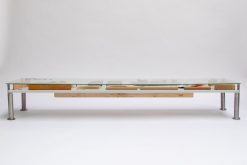 A collection of memorabilia acquired in the period of Van Eeckhoutte’s maker-ship from 2017 to 2021. Artifacts represents a simple gesture of acknowledgement towards a statement of material costs for something made.

Each artifacts represents a time stamped piece of leftover from an earlier work presented in a museum interpretation.

The artifacts featured are:

From top to bottom:

-Three experimented on logos, bend to shape to fit on something specific.

-Gold spray painted logo which final look was too unsatisfactory to be featured on a Van Eeckhoutte.

Back in 2017, Van Eeckhoutte imported wood from Curaçao and was less reliant on materials found on the street, as he, after working as a garbage man, started doing. Van Eeckhoutte’s first three original releases featured thick oak tables, with big bolts connecting the tabletop to the chassis. Artifact 1.2 is a cut-off of the first of these three tables, and was experimented on with holes. Original pencil lines can be seen on the artifact.

Piece of MDF cut with hearts used to spay paint on the back side of Castor E Pollux. This relic was once a leftover from an earlier work and could be dating back to 2017 but was re-used as a template for painting the red hearts.

Neill is a skeleton shaped table made early 2020. The cut-out piece of MDF fits on the shoulder and neck of the spaceman shaped table. The swirling motion, which can be fitted to “Neill’s” neck, was done to create a vertebra effect. “Neill” was made from leftover MDF dating back to 2017.

4.2 excess material from a pointed side of “Vitor”

Forty-five degree angles were cut from a large piece of oak wood to shape the pointy aesthetic of 2020 work “Vitor”. This table was entirely made out of a single oak tabletop which Van Eeckhoutte got gifted from a moving neighbour. “Vitor” was first cut and then painted, so the featured artifact has the original colour grading of the oak tabletop.

4.3 glued MDF fitting one of the vertebras of “Billie”

One of the heaviest works by Van Eeckhoutte to date is “Billie”, because its parts were made thicker by glueing two twenty millimetre MDF panels against each other. This can be seen on the side of the artifact as a thin line in the length of it. This artifact fits on the underside of one of the ribs of “Billie”.

4.4 small parts and larger pelvis from “Friend” (from Friend on Blue Chair)

“Friend” is a marionet skeleton first made for a local group exhibition called “My Generation”.  In the exhibition the marionet was featured on a blue chair. The skeleton, originally named “Koen” because of its bodily measurements corresponding to those of Van Eeckhoutte’s, was later changed to fit the chair better and was shortened in length, hence the excess pelvis artifact. The joints of “Friend” were also re-done after the exposition and what was left is featured and presented on marble. Once the skeleton fitted “Blue Chair” nicely they were released as a two piece artwork and dubbed “Friend on Blue Chair”.

“Cromme” was made from the same big oak table as “Vitor”, which was gifted by a moving neighbour of Van Eeckhoutte. “Cromme’s” legs were made from the underside of it, which used to be an elegant pedestal chassis. This can be seen on artifact 4.5, when looking at the uncut left side of it. The right side, where the cut was made, fits on one of the legs of “Cromme”.

“Pijl” is a furniture work focussing on further developing the idea of creation and its fine line with destruction. This train of thought is accented by arrows piercing the red chassis with one arrow spiking out through a holed glass plate. The idea is enhanced by breaking one of the added arrows. Artifacts 4.6 features two broken wooden sticks, as a form of experimentation on the breakage of wood. The wooden sticks once formed the bars of a crib found by the side of the road.

Made as a dragon-slayer inspired piece, “Draak” had to feature some implication of  battle. This was found in the form of steel rods made to look like arrow bolts taken from an old black bed frame. Featured as artifact 4.7 are two different options for the look and feel of the arrow bolts. One undone of its colour and taken back to its shiny steel look, and one different size for the middle piece of armature.

4./ unidentified piece of MDF found in the workshop

Looking at this artifact one can say for sure bone-shapes were cut from it. As there are many skeleton works in Van Eeckhoutte’s entourage, the question remains as to which skeleton work it is from.

In the process of creating, or rather destroying, three piece table set “Attacked”, one excess splinter was saved as a memory for the artifacts series. Artifact 5.1 was chopped of the front right corner of the middle table. The rounded corner is presented upwards.

A humanoid presence is figuratively illustrated in “Man”. The work features both arms and legs. Artifact 5.2 features four unusable limbs as the direction of the wood grain is facing the wrong way, making them vulnerable to breakage. Under the four hands and feet with horizontal grain another foot is presented. This one is correct in its direction of grain but was too short for the table to be balanced, and was saved for the artifacts series.

The head of “lamb” was made from a small piece of leftover oak dating back to early 2020. The scrap makes a fit right on top of “Lamb’s” head, and is a simple memorabilia for this small work. 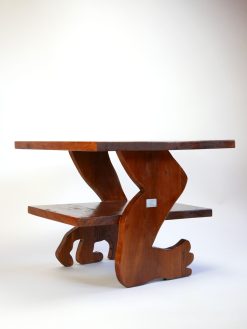 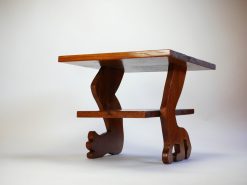 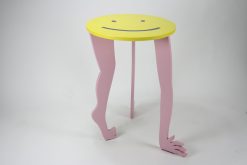 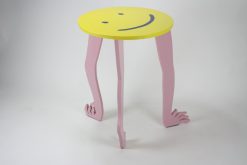 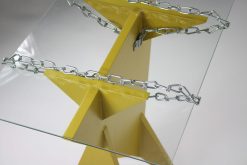 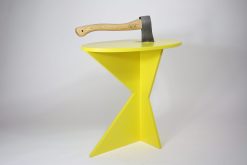 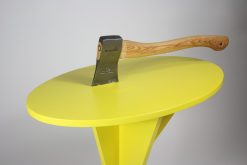 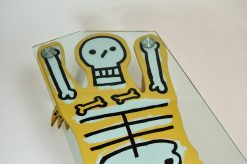 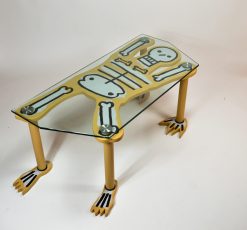 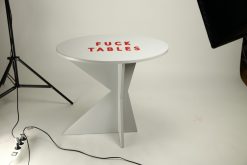 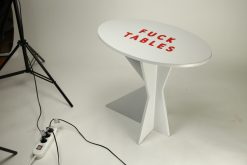 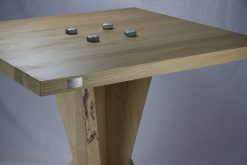 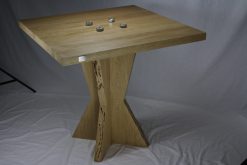 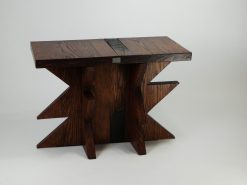 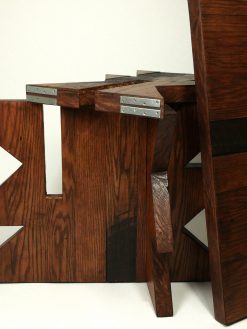